THE BRIEF
Agilent, a leader in life sciences, diagnostics and applied chemical markets, partnered with Cielo's Employer Brand Team to help build their brand presence on social media. Agilent wanted to leverage its recent achievement of being named one of the World’s Best Employers by Forbes in content that would be well received on social media. The goal was to not only grow their following and engagement on social platforms but to also showcase Agilent as an employer of choice in order to attract, engage and acquire new talent.

THE SOLUTION
To encourage maximum levels of engagement on social media, content needed to be eye-catching, compelling and easily digestible to capture the attention of both active and passive candidates. This led to the production of a 30-second animation for use across social media, featuring Agilent’s recent Forbes recognition.

For the paid campaign, we took advantage of Agilent’s global footprint and partnered to identify untapped markets. This allowed us to reach and target people who had visited Agilent’s careers site within the last 180 days – maximizing brand awareness and engagement. 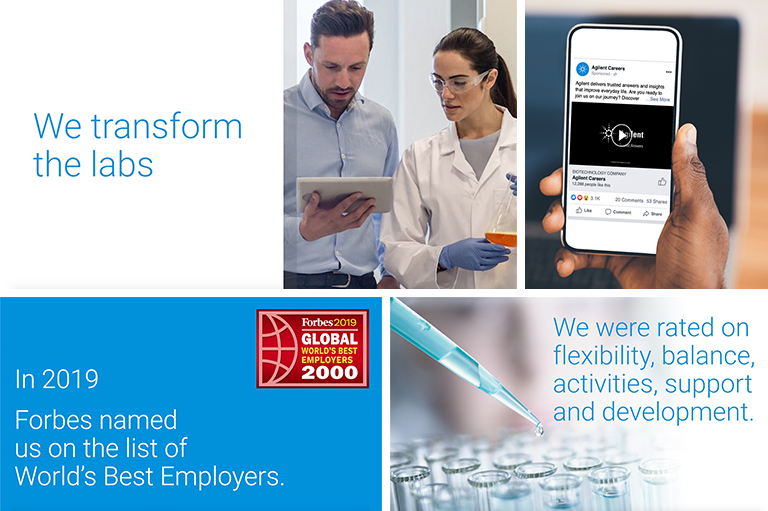 THE RESULTS
Initially seeing great success, we extended our campaign from one month to three, and overall budget from $500 to $1,500, to allow for continued momentum. Having previously engaged our targeted audience and pinpointing our advertising to "warm candidates," we saw tremendous success and overall page likes from our campaign.

Benchmark data states, on average, cost per page "like" was approximately $1.07. We optimized our campaign to reach our targeted audience and reduced that to a $0.27 cost per page "like," which in turn resulted in an 85% follower growth on Agilent’s Facebook page. By increasing follower base, content and overall brand is recognized by more people, thus, improving the opportunity for more traffic to the careers site, which over time, increases conversion rates.

In addition to this, the content also yielded over 260k impressions, 5k+ page likes and reached over 100k+ new eyes.

Learn how Cielo designed and implemented an integrated marketing campaign and data capture to generate employee referrals for TPx Communications.