VR in Recruitment: Enhance Your Recruiting Efforts with Virtual Reality

From market planning and candidate generation to technology adoption and data analytics, we can help you get the most from every aspect of your talent acquisition strategy.

I bought my first set of virtual reality goggles about two years ago. There were plenty of options to choose from, but I decided to buy an entry-level product called Google Cardboard. When it arrived, I downloaded the free Google VR app and added a few videos to my library.

If you’ve never heard of it before, Google Cardboard is essentially a small cardboard box that you slide your phone into and strap on your face.

And while the headset is incredibly simple, the reaction it produced was on the same level of wonder and awe that I experienced when I signed onto AOL for the first time in 1994.

The first video I tried was an underwater scuba adventure in the Galapagos Islands. I swam with schools of brightly colored fish and ducked beneath the white underbellies of giant sharks. With the help of my earbuds, I was also immersed in the sounds of marine animals talking to each other in a language that only they can understand.

And as I looked side-to-side and panned up and down, my mind began to wander. I started thinking beyond the swimming sharks and conjured visions of how VR could someday transform recruitment and HR technology. There are a few progressive companies innovating in this space, so I thought I’d highlight a few in hopes that it will prompt more people to use VR recruitment to improve the candidate experience.

A big trend in employment branding today is giving candidates a look under the hood. By showing pictures and videos of your office space, the theory is that it will entice people to come to work for you.   There are entire business models built off this idea – The Muse and Glassdoor, for example.

But “Employment Research” sites just show you what you want to see. Smiling faces, pingpong tables, kegerators and impressive lobbies. If you spend time clicking through these platforms, everything starts to look the same. Seriously, remove the logo from the images and it could be any office, at any company, anywhere in the world.

The more adventurous companies will actually shoot a video walk-through that serves as a virtual office tour. Or they’ll do some “employee testimonials” (that no one ever watches).

But to really wow your candidates these days, you need to go next level.

That means riding the next wave of innovation, which will come from VR production companies that enable candidates to use something as simple as Google Cardboard to take a more interactive and personalized journey through a prospective employer’s workplace.

Maybe you still see the pingpong table and the colorful conference rooms, but how about a trip through the cafeteria to see a typical day’s lunch spread? Or better yet, a walk through a department to see the exact office that bears your name on the door, including the spectacular view out the window?

To bring additional value, wouldn’t it also be interesting to meet some employees? Like, how about if you serendipitously ran into the CEO while you’re strolling through the executive wing? And how cool would it be if he or she welcomed you by name and gave you a high-level overview of the company’s goals for the year?

While this sounds far-fetched, my guess is that it’s not far off. The video production technology exists today and the personalization is no more than an API call away. For $15 per headset and an investment in some video production equipment, VR recruitment could WOW your most elusive candidates in ways that they’ve never experienced, giving you an edge over your competition.

For an example, take a look at how General Mills used VR for recruiting new graduates to their headquarters in Minneapolis.

“Day in the Life” Immersive Experiences

While Google Cardboard is an acceptable vehicle for taking an office tour to the next level, it’s just the beginning of where VR environments could transform the recruiting process. Cardboard won’t be the goggles of choice for more advanced applications, but I can only imagine what the future will bring once the devices get better, more affordable and more ubiquitous.

Recently, we did some experimenting of our own with the HTC Vive goggles in SkyLabs (below), our HR technology test kitchen. 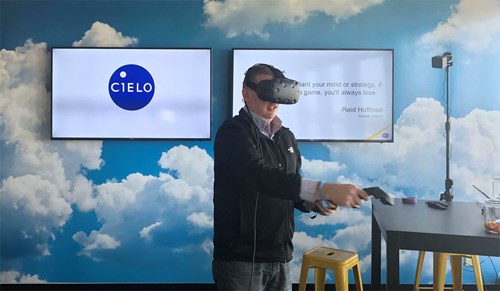 With this incredibly powerful headset and laptop, we were able to step inside a 4-dimensional environment where we could manipulate objects, create images, draw, paint and write in our virtual world. And by physically moving around, we could see our creations from any angle we wanted to for a unique perspective.

While not all of the applications need to involve manipulating your environment, you can clearly see how more advanced VR technology could truly enhance a day-in-the-life video.

Today, most cognitive and behavioral pre-hire assessments are computer-based. But technical assessments, which require a candidate to perform physical tasks or movements, are a mix of digital and physical. With advances in VR recruitment technology, there could be significant utility within some professions to be able to test candidates remotely at high-technology testing centers equipped with VR headsets.

For example, imagine you’re recruiting for a hospital that is looking to hire an orthopedic surgeon. You could certainly bring them in for an interview, run them through the standard credentialing process and talk to their references. But how do you know if they’re actually good with their hands?

Modern VR equipment like the Vive could enable an applicant to perform simulated surgical duties in a 4D virtual world. VR has been around for years to train surgeons, pilots and soldiers, but we’ve yet to see this content adapted for assessment purposes on any sort of scale.

Seems to me that pairing up an I/O psychologist with a VR instructional designer and a VR production house could transform the assessment industry for some jobs.

The Virtual Road Ahead

While VR hasn’t yet caught on among mainstream audiences for any application, it’s simply a matter of when, not if. And if history is any indicator, we know that the first companies to adopt new technologies have two significant advantages: they differentiate themselves as innovators, and they gain a competitive advantage by using a new approach for at least a year and sometimes more.

In the high-stakes world of recruiting, any edge over your competition – such as the use of VR recruitment strategies – can be the difference between winning and losing a great candidate.

Post contributed by James Colino, Manager, Technology Enablement. Find him on Twitter and connect with him on LinkedIn.

Recruitment technology expert Chris Watson has recommendations for apps that will help recruiters save time and optimize their performance.