In 1997, newspaper advertisements generated the most hires (28.7%) of all job-seeking platforms. Today, that number has dwindled to a mere 2%, as recruitment teams further align with a landscape now driven by technology, innovation, social media and mobile demands.

The digital age not only shattered the rock that was print journalism, but engulfed it and started anew. In the realm of talent acquisition, recruitment now exists almost entirely in the digital world—job boards, email campaigns, career websites, Skype interviews, mobile applications, Applicant Tracking Systems (ATS), talent analytics and social media platforms, among countless others.

But the leap to meet digital demands is not limited to talent acquisition. There is a growing demand for tech talent across the marketplace—in fact, 73% of U.S. companies anticipate substantial tech hiring in the next six months—creating numerous hiring challenges and intense competition. Today’s technical-elite are in a position of power, and they know it.

For a look at the state of today’s technical talent, the gap in supply and demand, and how employers are holding on to their technical veterans despite ferocious competition, we turn to this week’s edition of Talent Acquisition Fast Facts:

According to 2013 research from Dice, which surveyed 17,236 employed technical professionals, workers in this industry appear to understand they can easily grow their careers in 2014; in fact, 65% of respondents are confident in finding a “new, better position.”

With salary satisfaction also having declined by 3% since 2012, research suggests there is an increased focus on retention strategies, according to the Dice study. In fact, 66% of respondents say their organizations offered some type of retention motivator this past year (up from 53% in 2012). The primary motivators provided in 2013 include:

5.) Training, high-level recognition or other (8%) 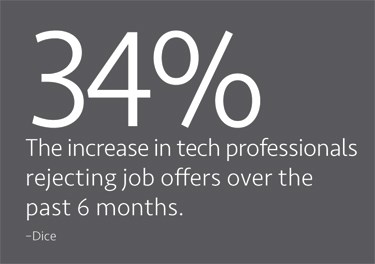 According to December 2013 research conducted by Dice, which surveyed 900 HR managers, recruiting professionals and staffing consultants across the U.S., compensation continues to be the number one reason technical veterans are leaving their current positions—specifically, 75% of surveyed respondents cite pay as the reason quality tech talent is leaving.

According to research conducted by Talent Culture, as it pertains to recruiting, the top three reasons tech-savvy professionals (active or passive) respond to recruiters’ outreach:

1.) Position is relevant to their background/experience (45% listed this as the top reason)

According to the aforementioned Dice study of 17,000+ technical professionals and organizations, five of the 12 most challenging cities to recruit tech talent are located in the Midwest.

Further highlighting the growing demand for top-tech talent, according to research by Microsoft, the technical gap between supply and demand is alarming. For example, a 2012 Microsoft survey on the state of U.S. technical talent estimates that the number of new jobs requiring a Bachelor’s degree in Computer Science is growing each year by 122,300 openings.

Have you directly witnessed increased competition for technical talent at your organization; perhaps competitors attempting to siphon off current staff? Other than those listed, how can companies better hold on to their technical veterans?

We’d love to hear your thoughts!