As recruiters, talent acquisition professionals and leaders in HR, we often discuss the importance of employee engagement, job satisfaction and retention. But as 2014 kicks off—if the past 365 days are any indication—morale is no longer an added bonus; it’s a business imperative. Research shows that workforce engagement and satisfaction not only lead to 43% more productivity (Hay Group), but 22% higher profitability and growth in retention.

However, many organizations still struggle in this area. In fact, nearly 50% of U.S. businesses felt the impact of higher turnover in 2013 than the year prior. 2014 may be a brand-new year, but optimizing employee engagement cannot become a thing of the past.

According to a year-after-year study conducted by the Society for Human Resource Management (SHRM), 54% of today’s U.S. employees believe a “good relationship” with their immediate supervisor is vital to job satisfaction; 57% also believe “good communication” organization-wide is key to job satisfaction.

Is there a correlation between tenure and belief in the importance of communication and relationships? Do younger generations care less about these factors because they’re constantly looking to job-hop

According to the same SHRM study, 70% of employees say they are happy with the relationships they’ve developed between their colleagues, leaders and direct managers; interestingly, this satisfaction, has not translated to improved retention—as 44% of these respondents plan to seek work outside of their current organization within the next year.

Despite signs of improved managerial relationships and a growing focus on open communication, according study conducted by consulting firm Dale Carnegie Training (which surveyed 1,500 full-time U.S. employees), only 29% of employees are fully engaged and 26% are disengaged. Indicators such as these have led experts to predict turnover may rise to 65% in 2014. 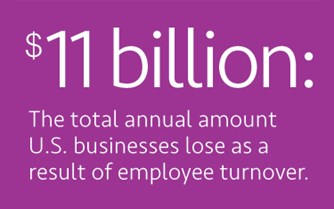 If communication and positive relationships aren’t enough to improve retention, what strategies should employers undertake? Compensation? Growth and development? Is there a one-size-fits-all resolution?

Speaking of engagement and satisfaction, top employers such as Facebook and Twitter hire more than 50% of their hires via referral, according to a study by YesGraph. According to the same study:

Does encouraging or implementing referral programs empower employees, make them feel respected, listened to and appreciated? Is it enough to tip retention in the right direction?

Though employers should strive to engage and satisfy the workforce, both must be the result of a 50-50 partnership. New research from the University of Southern California Marshall School of Business found that day-to-day habits—of both employees and high-level staff—can incite dissatisfaction at all levels; a survey of 554 full-time professionals making more than $30K, found that:

Obviously, there are times when phone and email usage are required, even in meetings. But research suggests picking up your smartphone or opening a laptop sparks feelings of disrespect, inattention and that listening is of little importance. Have you had a similar, personal experience that affects how you feel about this topic one way or another? Do you think something as seemingly minor as keeping a smartphone put away during meetings can improve employee retention and/or how managers view the performance of their employees?

We’d love to hear your thoughts below!