With Each Generation, Recruitment Gets a Refresh

Classifying people by their generation has proven to be an irresistible pastime. Over and over we hear about how Baby Boomers are set in their ways, Generation Xers are eternally skeptical and millennials are entitled and lazy. Of course, the truth is always more complicated than that, but there is definitely value in taking into account the differences that come with age and circumstance.

The recruitment industry has gone through generational changes, too, taking cues from society at large. In short, which generation you belong to probably had an effect on how you recruit or how you have been recruited. Here is a look at how the recruitment has shifted with each new generation. 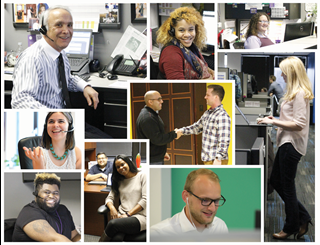 The One Job, One Career Generation (Traditionalists, 1925-45)
Many of these folks were entering the workforce right around the time the modern recruiting industry was born, the 1940s. They did not just create a baby boom, but a worker boom as well, as the end of World War II led to a huge influx of workers looking for jobs and bringing new skills with them. Staffing companies – and the recruitment industry as we know it – emerged to meet demand. Recruiting was largely local, and mostly done by the business. When Joe Manager needed a new employee, he posted an ad and went through applicants himself. If outside help was needed, it came from personal networks or local executive recruiting agencies. The general understanding was that a worker could find a company to spend their entire career with. While that obviously has changed over the years, it instilled a premium on respect and loyalty – for both themselves and the organization – that still carries over.

The Movin’ On Up Generation (Baby Boomers, 1946-60)
The focus of the recruitment industry grew from simply filling vacancies to more refined methods and objectives. Over time, recruitment began to professionalize, taking it out of the hands of line managers and into larger-scale teams and processes. Recruitment companies learned to speak more directly to individual candidates, aided by a largely healthy economy that enabled organizations to attract this new crop of workers with cultures that offered regular raises and promotions. Throughout their time in the workforce, Boomers have valued freedom to make decisions as well as good relationships with co-workers.

The Work/Life Balance Generation (Generation X, 1961-80)
Downturns in the economy (long recessions in the ’70s and ’80s, the energy crisis), dimmed some of the optimism from previous decades. Parents were working more – either out of necessity or for career advancement – producing a generation of “latchkey kids” who were often on their own at home. Once they entered the workforce, Gen Xers sought the work/life balance that perhaps they did not see with their Boomer parents. At recruiting offices, the computer revolution had not quite taken hold, so the piles of data and information that had been collected was still being shuffled around on paper and index cards. The cold call was king – recruitment offices resembled telephone banks, and no recruiter had credibility without war stories of “smile and dial.”

The Tell Me Why Generation (Millennials, 1981-Present)
With technology transforming every aspect of daily life, recruiters are able to be more individualized than ever with candidates. Previous generations might have been uncomfortable with sharing so much information about themselves, but with the advent of social media, it is simply the world millennials know. Millennials dream big and desire meaningful work. Employer branding – which increasingly includes a sense of greater purpose and societal good – has arisen as a key factor, with current employees becoming some of an organization’s strongest ambassadors. Recruiters can communicate with millennials frequently and instantly, making for a more personal relationship.

What’s Next? (The Artificial Intelligence Era)

In the next generation of recruitment, recruiters can expect to be assisted by smart software. The idea of picking through an unsorted, unranked set of resumes will be completely foreign. Instead, they will all come pre-ranked by AI while most administrative work will be done by software systems – from interview scheduling to onboarding logistics. Recruiters’ work will be higher skilled, focused more on making human connections and very little on administrative tasks. Candidates’ expectations will continue to evolve, as “work” further separates from traditional “jobs.” Freelance workers, gig workers, single-person consultancies, flexwork and myriad other arrangements will provide options for workers in how they arrange their work.

As recruiters, it is essential that we understand how best to speak to candidates about what they need and want out of a position. Which generation they belong to can be a useful tool in deciphering that. Keeping in mind that today’s millennial will be tomorrow’s traditionalist, it is important to always be adaptable to change.