How HR Will Convince the C-Suite to Face the Future

Great questions were raised by David D’Souza, head of London for CIPD, as well as the very engaged audience at the London HR Connection event held on St. Patrick’s Day. Discussions surrounding the event’s theme, “Are Robots our Future Employees?” abounded.

As a mum, my favorite question was, “Why should we be teaching our children to write when Mark Zuckerberg asserts that in 10 years’ time we will be able to update Facebook through thoughts alone?”

We have all heard dire warnings of robots taking over a whole range of roles, from legal secretary, to HR admin and taxi driver. David focused on what that means to traditional career paths. If the previous entry-level roles in a function are automated and the humans are removed, how do you become an HR adviser or a lawyer?

We need to rethink our trajectories. 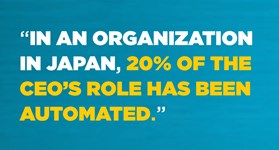 It is not just lower level roles that technology is impacting. In an organisation in Japan, 20% of the CEO’s role has been automated. We romanticize the importance of gut instinct, but there are some decisions that are best made on data rather than intuition. Recruitment was an area David used as one that has previously been about “feel,” but people are increasingly realizing this leaves too much room for unconscious bias.

He sees the future of HR in organisational dynamics and team dynamics. The impact of HR that would be the hardest to automate is surely the “strategic coffee.” That off-the-record intervention when a person is in crisis and they are about to make a pivotal decision about whether to resign, explode at a frustrating colleague or share a great idea that no one will listen to. That is because the hardest aspects to automate are empathy and trust. Roles that require these attributes are the ones that will need people in them for the longest time.

David is concerned with the ethics of technology use by HR. He quoted Jurassic Park’s Jeff Goldblum character, who said we are too busy thinking about the “can we?” to consider the “should we?” There is a Microsoft tool that will be able to predict when someone is about to have a physical or emotional breakdown. Is that suitable knowledge for an employer to hold? What will we be tempted to do with that knowledge?

We are too busy thinking about “can we?” to consider “should we?”

David worries that we are too short term. Taxi drivers are going on strike because they see the risk of Uber, but they are not campaigning about driverless cars. He advises to go further out – not the next five years but the next ten to fifteen years and work our way backwards to identify what we should be encouraging the next generation to focus on.

To change the conversation from short-term monthly, quarterly and annual business targets, he proposes that HR focus the C-Suite on their legacy – appeal to their egos, not just their rational brain. To address long-term risk and change, we need to have long-term strategies. Make sure you are playing the strategic role necessary to help bring about this change by reviewing our article on the seven characteristics consistent among best-in-class Chief Human Resources Officers.