Blockchain for HR and Recruitment Is More Than Just Hype

Across every industry, companies like IBM, Microsoft, Toyota, JP Morgan and Accenture are tripping over themselves trying to build products and services that take advantage of this innovation. Which begs the question: is it all hype, or is it really the next technology revolution? And furthermore, what does it mean for HR technology?

Think of "blockchain" as a public spreadsheet (similar to a Google Sheet) that keeps track of transactions as they happen. These "transactions" could be anything from a business paying a freelancer to a computer validating the authenticity of a Social Security number or an executive issuing stock options.

While it’s true that any database today could record transactions in this manner, what makes blockchain different is that instead of the transaction being kept on one server and owned by one company, the data is encrypted and stored in “blocks” across a global network of computers. As more data gets stored, you get a chain of blocks. Hence, "blockchain."

Why is blockchain important?

The majority of data and transactions within organizations like Linkedin, Facebook, Equifax, JP Morgan and others are centralized, meaning the sites collect your data and store it on their servers. Since they have your data, they get to do whatever they want with it. Most notably, they sell your information to other companies in the form of ads, credit checks or mortgage-backed securities. This also creates a single point of failure with your data, because if their servers go down, get hacked, or the company goes out of business, you could lose your information or have it compromised.

Blockchain technologies take power away from single organizations and give you back some privacy, ownership of your data, and a layer of security that you can't get from centralized organizations that are getting hacked more and more. A perfect example of this was the recent Equifax data breach that impacted more than 145 million Americans.

So blockchain is as much a movement as it is a technology.

You’ve probably heard of Bitcoin, the popular digital payment system that’s disrupting the banking industry by making it possible to spend an alternative form of virtual currency (Bitcoins) anywhere in the world. This removes having to deal with corrupt local governments or banks who charge an arm and a leg to transfer money from one currency to another.

All Bitcoin transactions are stored and visible on this "Google sheet," formally known as a "public ledger." Every transaction is like a public contract, but also anonymous. Only the two parties involved will know the details, because they exchanged Bitcoin addresses with each other.

When you add some code on top of a decentralized blockchain platform like Ethereum, you can create something called a "smart contract." A smart contract is simply an automation that executes an action on the blockchain when specific conditions are met. This has the potential to automate a lot of workflows that currently require human intervention.

For that reason, I think blockchain applications with smart contracts hold the most promise for HR disruption.

The easiest way to understand how blockchain technologies and smart contracts will disrupt HR is to figure out who's hoarding data and making you pay for it. You could also look for industries or companies where middlemen are doing tasks that could easily be automated with a smart contract.

This technology is still in its infancy, so the companies working in this space have yet to prove their cases. That means case studies will have to wait a couple years, but just keep in mind that early adopters have the advantage when it comes to technology.

Blockchain for HR and Recruiting

We’re still a couple of years away from seeing mass adoption of blockchain applications in the consumer space, and HR, recruitment and talent acquisition might be even farther away. It’s still valuable, though, to see what's coming. At the very least, it could make for an interesting slide to add to your next HR strategy deck!

Here are a few areas where you might see disruption first:

Social Networks: LinkedIn is the perfect example of a centralized network that hoards your data and sells it back to you. I believe we'll see a decentralized social network that puts your data back under your control and potentially allows you to monetize your expertise via micropayments for contributing content, comments, or performing tasks. An emerging example of this is Steem.

Background Checks and Identity Verification: The background check process is slow, expensive, and is a burden to the candidate who has to fill out the authorization forms. In the future, a candidate could have all of their personal information – prior addresses, previous employers, past compensation data, certifications, degrees, transcripts, Social Security number, visa status – pre-validated and stored on a secure blockchain application. Once verified, this information could be automatically accessed by an organization for free because the candidate owns the data and can grant access. No more recruiting agents wasting days chasing down past employers and schools to validate your information! There are several companies already working in this space. 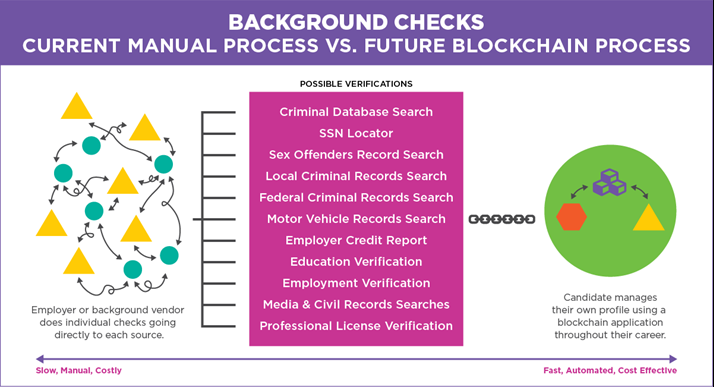 Resume Validation and Accessibility: We currently pay job boards for access to the resumes housed in their databases, but the candidates who own the resumes don't have much control over who sees their information or what is done with it. On the recruiter side, some databases are filled with fake resumes. I think we'll start to see companies build a decentralized database of resumes, owned and controlled by candidates and authenticated by blockchain.

Consider a world in which the employer pays candidates for the right to download their resume or contact them, instead of paying a job board or Linkedin. Everyone wins! (Except job boards and LinkedIn) Candidates with great resumes will get paid micro-amounts to be contacted, and employers, who are used to paying for this action anyway, are now showing the candidate that their skills are valued by paying for the right to talk to them.

Recruit Technologies recently announced their intent to build solutions for this space.

Onboarding: Getting a new hire up and running involves a lot of transactions – they need a computer, passwords, key card access, an email account, an office, etc. If you've ever optimized this process, you'll know that it's a mess, riddled with mile-long email templates, checklists, and onboarding software. Thankfully, much of these transactions can be automated using smart contracts. Oracle recently applied for a patent to use blockchain technology to create efficiencies in employee workflows.

There are other potential applications like paying freelancers, automating stock plans, electronic signatures and more.

While blockchain technologies have tremendous potential, it's still early. But don't mistake "early" for "transient." Naysayers scoffed at the internet for 10 years before it became nothing less than the fabric that connects our lives.

Whenever I'm evaluating bleeding edge technology, the one question I like to ask is, "What's the smart money doing?"

From what I can see, it looks like all the smart kids in tech, all the venture capitalists with money, and all the industry titans with market share are feverishly working on blockchain solutions. So with all this inertia behind it, it’s safe to say that blockchain isn’t going anywhere.